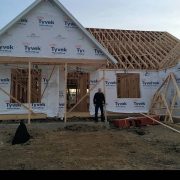 Throughout his career, Jay Dulla, executive vice president of Meritus Homes, has followed the progression of baby boomers and Generation Xers — building the types of homes they needed and wanted as they went through life.

He got his first taste of the homebuilding industry when he worked for a financial lender that specialized in loans to real estate developers. Then he took a position with a small custom builder of high-end houses on the North Shore called The Baxter Group. It was there he truly learned the business, getting his feet wet in the entire development process, from zoning to marketing.

rom there Dulla went on to run the real estate operations of Plote Excavating, where his most notable project was Boulder Ridge Country Club in Lake in the Hills. In 1992 when D.R. Horton came to Chicago (before they purchased Cambridge Homes), he took the reins and built it into one of the area’s leading homebuilders in less than five years.

Around the millennium, Dulla started his own firm, Remington Homes. Then, during the long recession, he worked on a variety of small projects before, most recently, he took over running day-to-day operations of Meritus Homes based in Deerfield.

Meritus was founded in 2009 during the depths of the Great Recession. It was formed by two former Pulte executives and their investment partner, Gary Janko of the Janko Group.

Meritus purchased parcels from other builders at bargain prices. But it only chose properties that were in great locations where land was in short supply and high demand, Dulla said. Meritus has been building single-family homes on those parcels ever since.

What is your company’s philosophy?

“Overall, Meritus works to deliver quality homes that include the latest trends, which feature unique architectural details and offer the flexibility for owners to use rooms in a variety of ways.

“Meritus is a semi-custom builder, which means we will work to make the customizing changes to our existing plans that our customers want.

“Although the baby boomers have always been a big target, we continue to build communities for mixed ages because there will always be active adults who want to continue to live with other age groups. But we are building more ranch homes in those mixed-age group subdivisions because empty-nesters want them, but so do an increasing number of younger families.”

Meritus Homes is building subdivisions in St. Charles, Lake Villa and Addison. Another small community in Lake Forest is expected to open this summer.

In addition, Meritus is purchasing older homes in select communities like Winnetka, Wilmette, Glencoe and Northbrook, tearing them down and building new, state-of-the-art homes for those who want to live in those enviable communities, but also want a new house.

Meritus’ current subdivisions are The Reserves of St. Charles, which has 60 lots remaining; Lake Vista in Lake Villa, where 21 lots remain; and an age-targeted, maintenance-free 87-lot community at the intersection of Army Trail and Mill Roads in Addison.

What is the best part about being a builder?

“It gives me such a sense of pride when I know that I have had a part in creating a community that 150 to 200 people call home, and where they spend their holidays with family and friends. I really enjoy driving back through those neighborhoods and seeing how they have developed.”

What are the biggest changes you have seen?

“From the standpoint of a new-home builder, the biggest changes I have seen are that, because home values have not risen as much as they have in the past, builders are making much smaller margins. So we are decreasing the sizes of the homes we are offering and we are eliminating many of the volume spaces we used to offer. We have to stay within the price constraints of any given market.

“But we are always getting the latest designs from our national architects. For instance, in some designs we are building the laundry room directly next to the master closet with just a pocket door in between, for added convenience. So we are staying on the cutting edge, despite the fact that we are building smaller.”

In addition, Dulla said, builders have to be more cautious now about picking their locations and not become overloaded on land positions.

“We generally choose infill properties that are close to expressways and shopping and in municipalities where existing residents want to stay.”

What do you expect in the future?