They say when it’s right you know it. That’s exactly the case for Carly and Geoff Reisner who purchased a Clover ranch at The Reserve in St. Charles from Meritus Homes. What began as a casual search for a single-family home turned into a quick decision to purchase the moment they toured the Clover model.
Living in a townhome in Elgin, the couple was just starting their home search in late 2017. After touring about a half dozen new homes along with several resales, they learned about the new ranch model Meritus Homes was debuting at The Reserve in St. Charles.
“Suddenly, what we expected to take six to eight months turned into us putting a deposit down within six weeks,” said Carly Reisner. “Even before we walked into the Clover model we knew no other home was going to be good enough. And we were right.”
The Reisners closed on their new Meritus home in September of 2018 and have been thrilled with their decision from day one.
“Geoff’s sister lives in The Reserve so we were familiar with the neighborhood,” said Carly. “We wanted to stay in the Fox Valley area near our families which made this location highly desirable.”
At The Reserve in St. Charles, Meritus Homes is offering five floor plans for the community’s semicustom homes. The Clover is one of two ranches. Three two-story designs also are available. Overall, homes have 2,491 to 3,716 square feet of living space, three or four bedrooms, two to 3-1/2 baths, and two- or three-car garages for base prices that range from $519,900 to $569,900.
The Clover is an elegant ranch with an open-concept layout. The center of attention is the everyday living space, which features the designer kitchen with center island flowing into the adjoining dining room and spacious living room. A covered porch in back is ideal for outdoor dining or simply relaxing. The master suite has a walk-in closet and private luxury bath. A second bedroom also has its own bath and walk-in closet while the third bedroom can be converted into a den. In addition to the full basement, extra storage space is abundant in the garage.
“We found the Clover’s layout appealing,” said Carly. “We joked that we’re too young for a ranch but Geoff grew up in a ranch and his mom told us that we would love raising a family in one.”
“The Clover is relaxed and welcoming, with no formal living or dining room that we won’t use,” she continued. “While it’s casual, it has a luxurious presence thanks to the 10-foot ceilings and fine details. Plus, the whole back of the house is windows that let in lots of natural light. No detail was left unconsidered—there’s even a window in the pantry.”
Carly noted that the couple did make some upgrades like adding a tray ceiling in the master bedroom and an octagonal tray ceiling in the foyer—which creates drama. They also added a bay window in the dining area and upgraded to a deep pour basement from the standard basement. They added a sliding door between the master bath closet and the neighboring laundry room to make doing laundry extremely convenient. The couple turned the third bedroom into an office, as well.
“We really enjoyed working with Meritus Homes because of their flexibility,” said Carly. “We were able to make semicustom changes.
“In the model, the owner’s bath only had a shower,” she continued. “We worked with Meritus Homes to reconfigure the space to include a freestanding tub and separate vanities. Now Geoff feels like he’s in a luxury hotel or spa.”
Coming from a townhome, the Reisners had never purchased new construction before. Carly believes that working with a mid-size locally based builder over a big box economy builder was a huge advantage.
“With Meritus Homes, I received individualized attention from people who had the ability to solve problems, which are inevitable when building a house,” she explained. “Everyone from the salesperson to construction manager was a pleasure to work with. They were patient, thorough and provided us with answers that were in alignment with our goals. We are really happy and the process has been a breeze.”
While the Reisners built their home from the ground up, Meritus Homes has two homes ready for quick move-in at the Reserve in St. Charles: the two-story Marquis priced at $624,900 and the Clover ranch priced at $627,500.
Nearly six months after moving in, the Reisners are thankful every day for their decision.
“We can get to two downtowns—St. Charles and Geneva—within 10 to 15 minutes,” said Carly. “Both offer amazing food, a quaint and warm feel, culture, and charming shops. At the same time, everyday conveniences like Target and Costco are nearby along the Randall Road corridor.”
Because of the large homesites that provide big back yards and its location in highly rated School District #303, The Reserve in St Charles is home to many families with young children. However, the neighborhood also has retired couples who have been attracted to the ranch homes. Carly described the mix of residents as a very social group…inviting, warm and kind. The Reisners already have seen homeowners out walking their dogs on the community’s trails and expect more outdoor activity as children play in the neighborhood park once the weather warms up.
To visit The Reserve in St. Charles, take Rt. 31 and turn west onto Reserve Drive, which is between Red Gate Road and Silver Glen Road. Proceed to the sales office at 775 Reserve Drive. A decorated model is open to tour from 10 a.m. to 5 p.m. Monday through Saturday and from 11 a.m. to 5 p.m. Sunday.
On Saturday, March 2, Meritus Homes is hosting an open house event. Home shoppers are invited to visit the property, tour the quick move-in homes, and enjoy pizza and refreshments from Riverside Pizza & Pub. Two quick move-in homes are available to walk through and are ideal for anyone who has already sold their current house and is on a short timeline to relocate.
For more information, call (224) 634-4054 or visit www.MeritusHomebuilders.com. 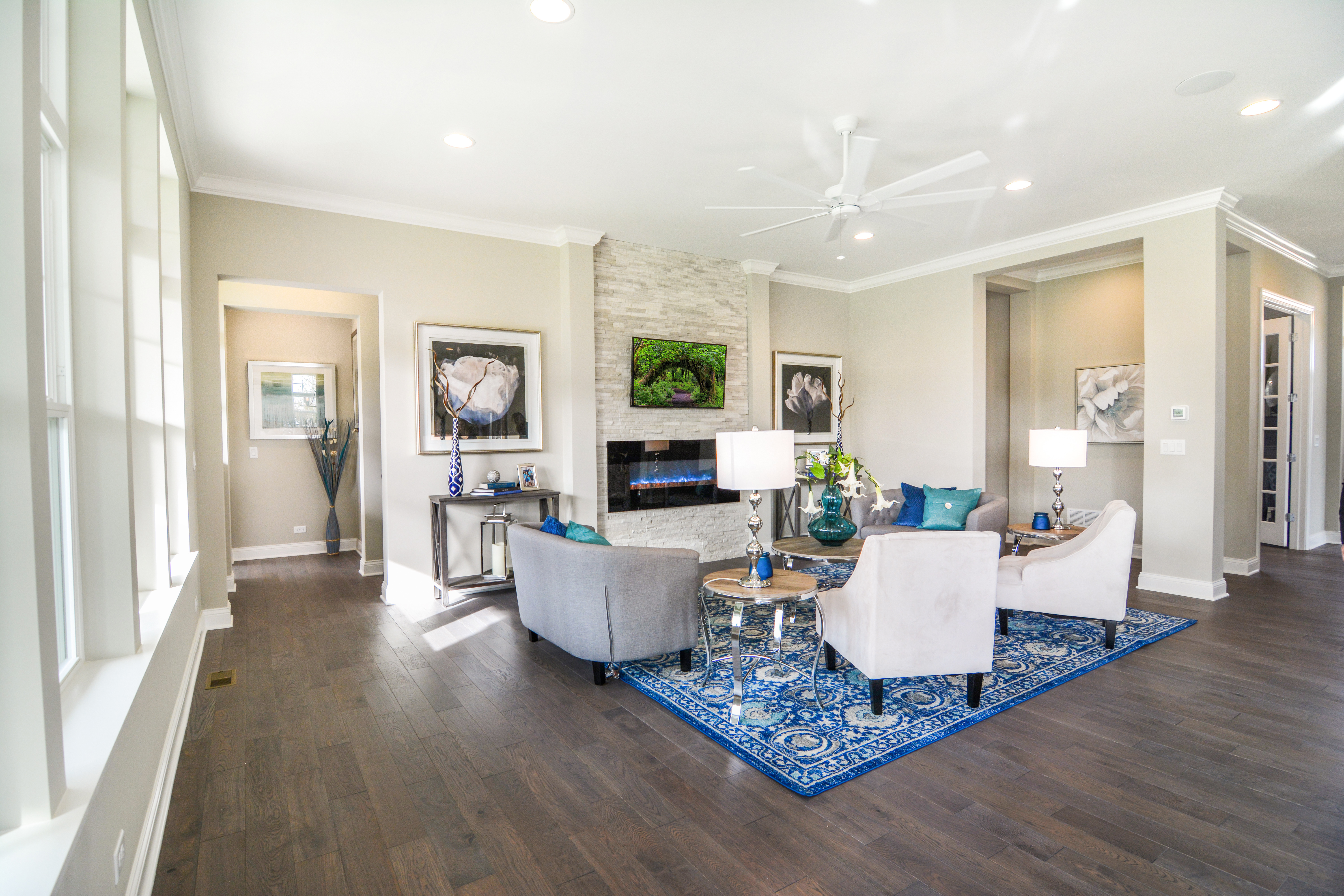 An open-concept layout is one of the design features attracting new-home buyers to the ranch homes at The Reserve in St. Charles. 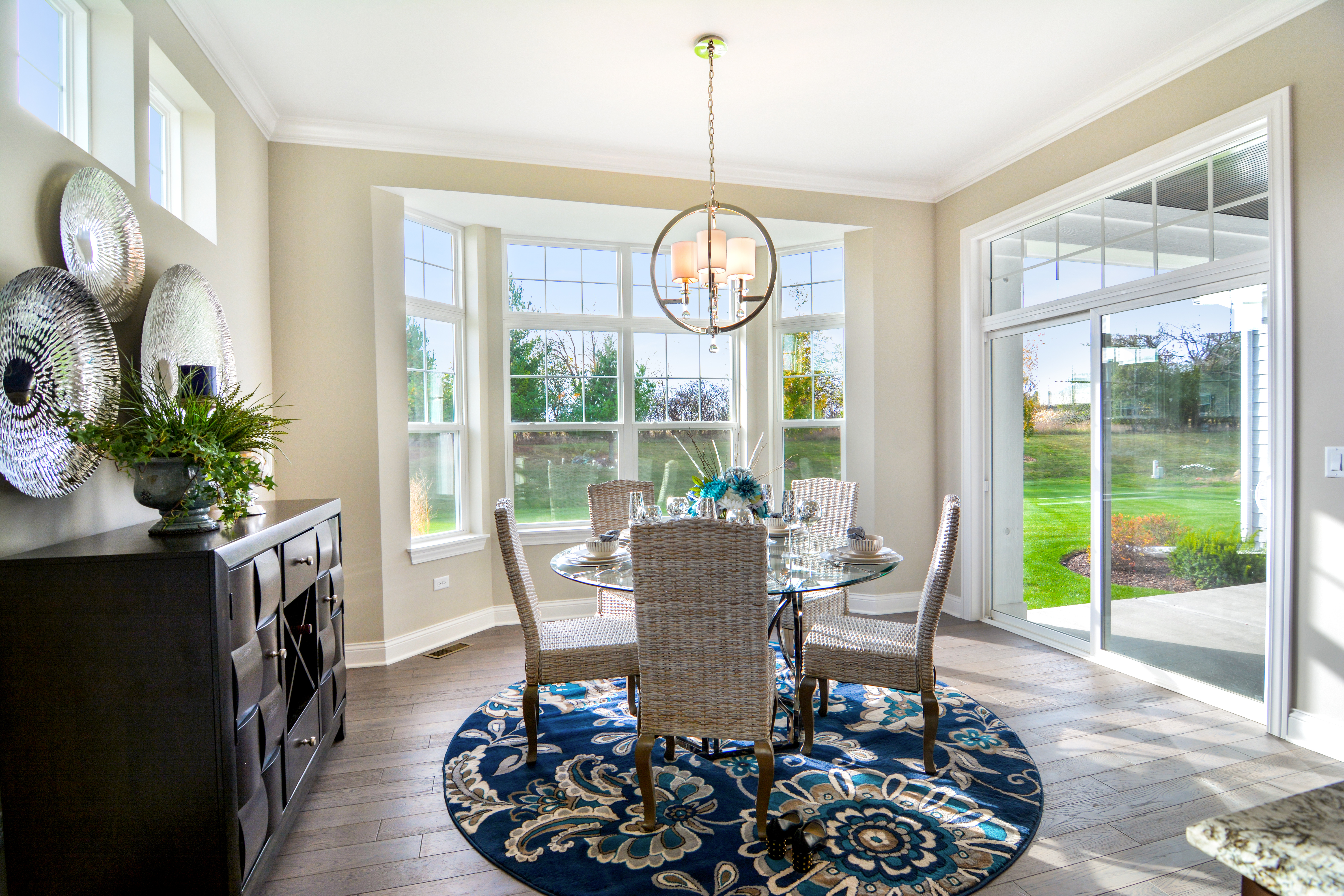 Meritus Homes pays special attention to the details, like creating a bright and airy dining area in the Clover ranch.

Buyers Attracted To Low-Maintenance Ranch Homes At The Enclave At Mill Cre...

Boomers are driving accessibility in housing
Scroll to top